With the mighty Indomitus hitting shelves in stores worldwide this weekend, we thought we’d take a look back at the long, storied history of the Warhammer 40,000 boxed set. But before we do, it would almost be rude not to start off with the legendary forebear of the game itself…

Way back in the late 80s, a futuristic wargame set in the grim darkness of the far future was about to explode onto the scene. Rogue Trader wasn’t a boxed set, but a tome of lore that laid the foundation of the war-torn galaxy we all know and love. In fact, a few kernels of this classic background have even made a welcome return in recent years – the Ambull and Zoat have both appeared in expansions for Warhammer Quest: Blackstone Fortress. Oh, and we probably shouldn’t forget a little thing called the Horus Heresy that also made an appearance (albeit as little more than a brief mention)! 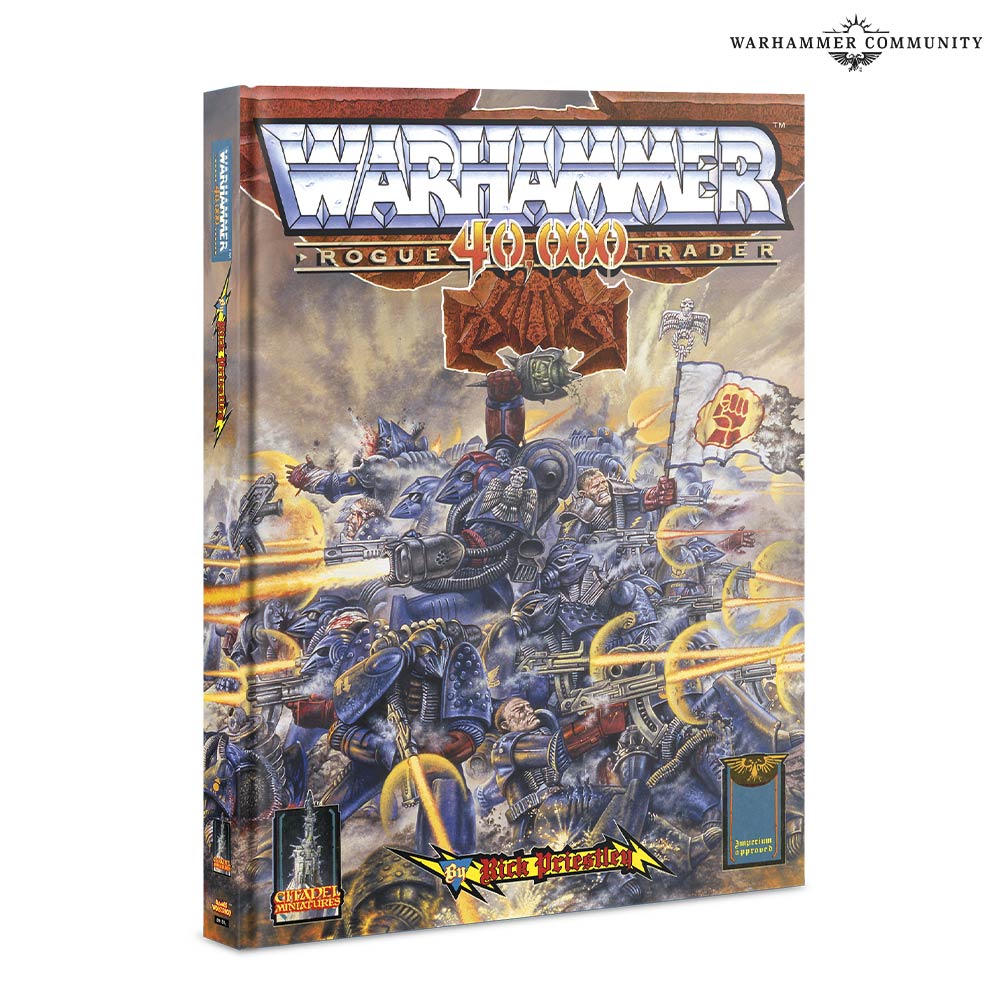 What’s more, the book’s cover was graced with one of the most enduring and iconic pieces of Warhammer 40,000 art, depicting the last stand of an embattled company of Crimson Fists against an encircling Ork horde. This classic scene has been lovingly recreated by new generations of artists twice since – the most recent example featuring Primaris Space Marines for the first time! 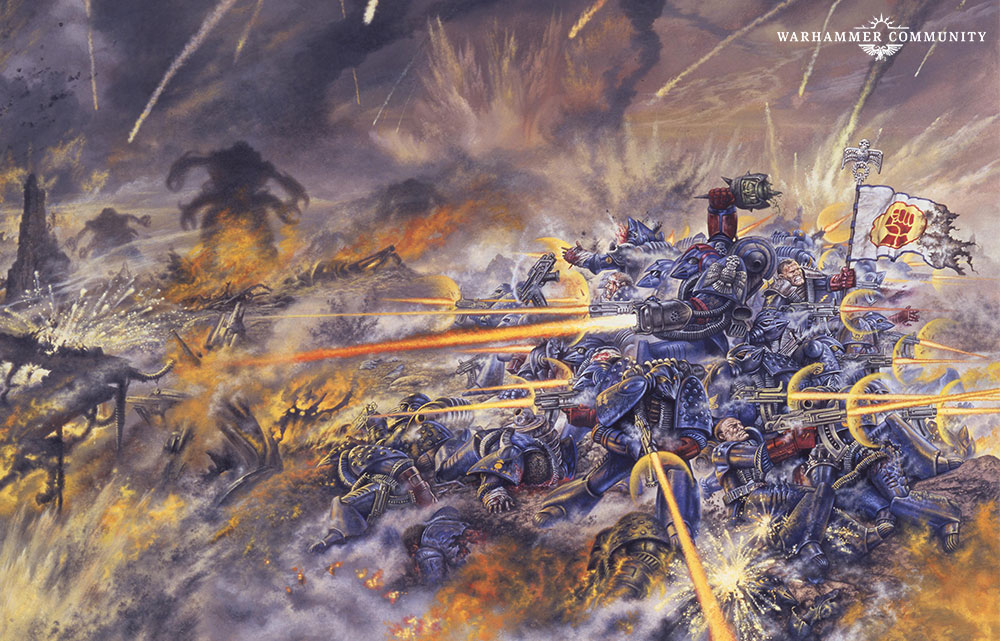 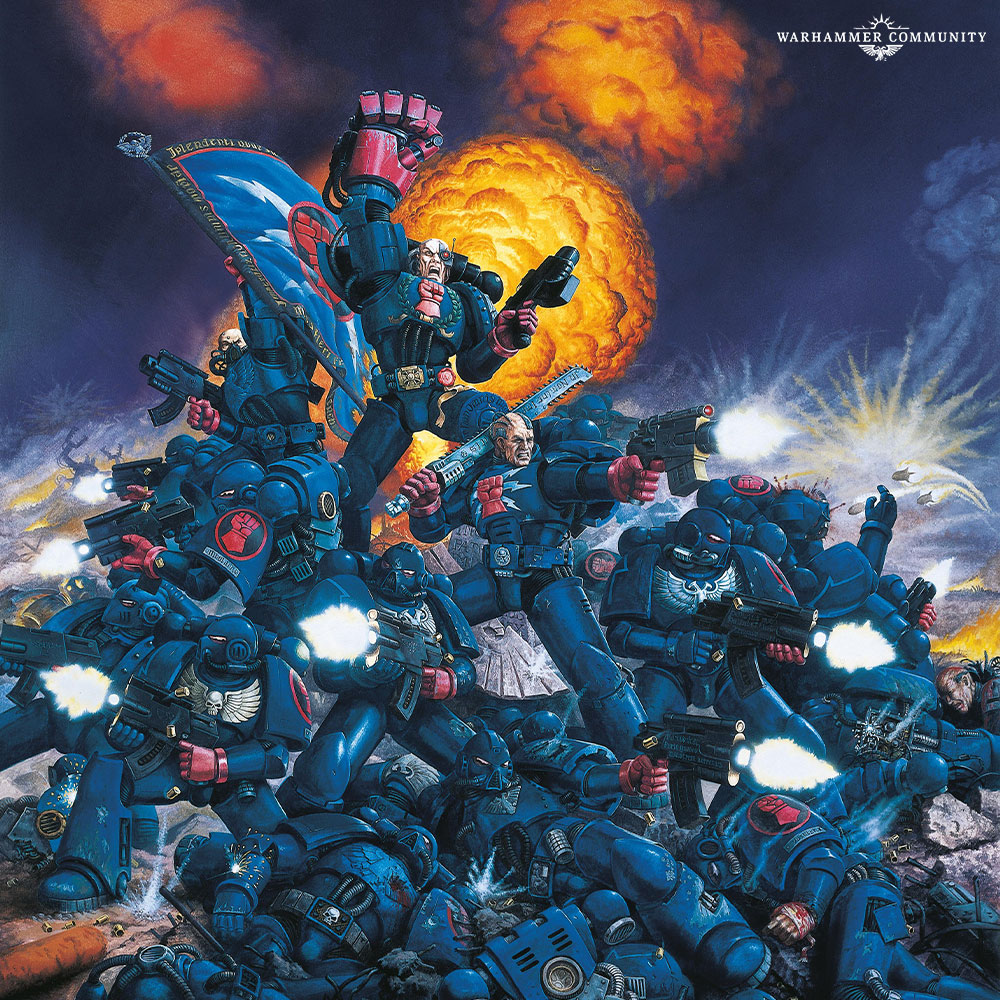 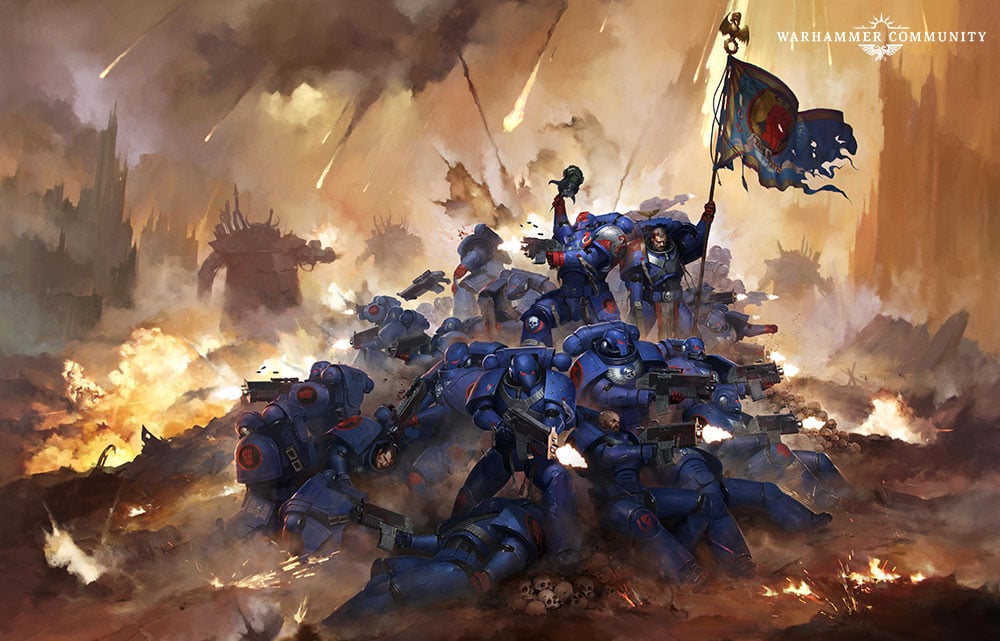 Rogue Trader also provided detailed, roleplay-oriented rules that enabled players to bring this gripping new setting to life. It even contained a scenario, which let you recreate your own battle between the Crimson Fists and the Orks, called Battle at the Farm.

Six years later, the first dedicated Warhammer 40,000 boxed set landed. As the heir to Rogue Trader, this version of the game was lovingly referred to as the ‘Second Edition’. Rogue Trader’s original roleplay elements had evolved during its lifespan, with various expansions culminating in what eventually became a brand-new game system that took the action to the battlefields of the 41st Millennium in the form of a full-on tabletop war game. From there, Warhammer 40,000 has never looked back! 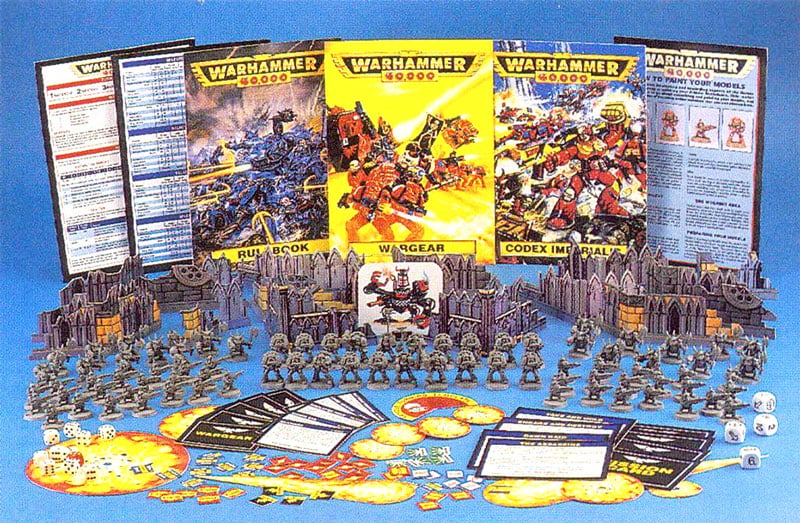 The exceedingly vibrant colour palettes of the blast templates and the Wargear book may have been an epic assault on the senses, but the box was filled to bursting with everything a budding player could need to learn the game. Cardboard terrain, two 10-man Tactical Squads of Space Marines, and a veritable horde of greenskins in the form of Ork Boyz and Gretchin were supplemented by dice, templates, reference cards, a rulebook, and two detailed background books. If it wasn’t bad enough that the Space Marines were grievously outnumbered, they also had to face up to one of the most terrifying threats imaginable – a cardboard cut-out Deff Dread!

The second edition boxed set had set an impressive precedent. However, by the time its replacement arrived five years later, the improvements that had been made in miniatures design were apparent from the start. Not only was a new Tactical Squad featured in the set, rendered in far greater detail than before, but they were accompanied by an actual vehicle – no cardboard cut-out this time! – in the form of a multipart Land Speeder. The Drukhari (or Dark Eldar as they were known at the time) also made their debut, replacing the Orks as the adversaries of the Space Marines in the form of 20 Kabalite Warriors. 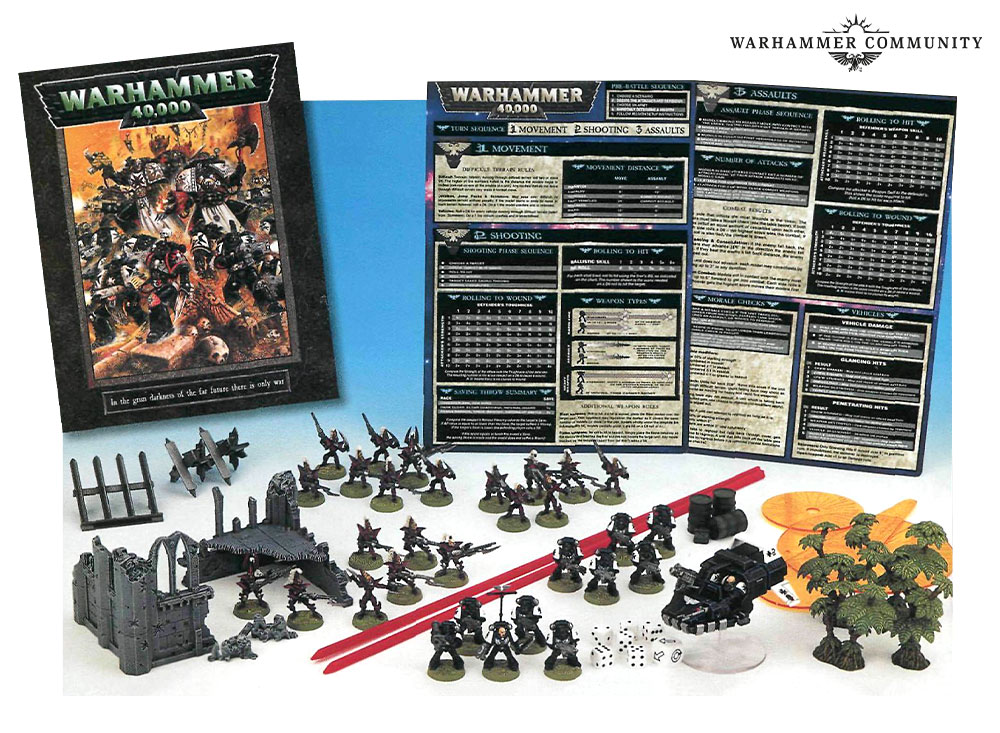 By now, plastic ruins and jungle trees had replaced the card terrain. Similarly, the previous edition’s myriad card explosion markers had been consolidated into three see-through plastic templates – one each for blast, large blast and flamer weapons – all the better to see what you were blowing to pieces! These templates would go on to become a mainstay of the game (and its boxed sets) for many years to come. Meanwhile, the large rulebook returned to its Rogue Trader roots, combining a detailed background overview of Warhammer 40,000 with the game’s full rules in a single tome.

The new millennium welcomed its first new Warhammer 40,000 boxed set in 2004 with Battle for Macragge. The Tyranids took their turn as antagonists – after all, it was set during the First Tyrannic War, when Hive Fleet Behemoth invaded the Ultramar System. 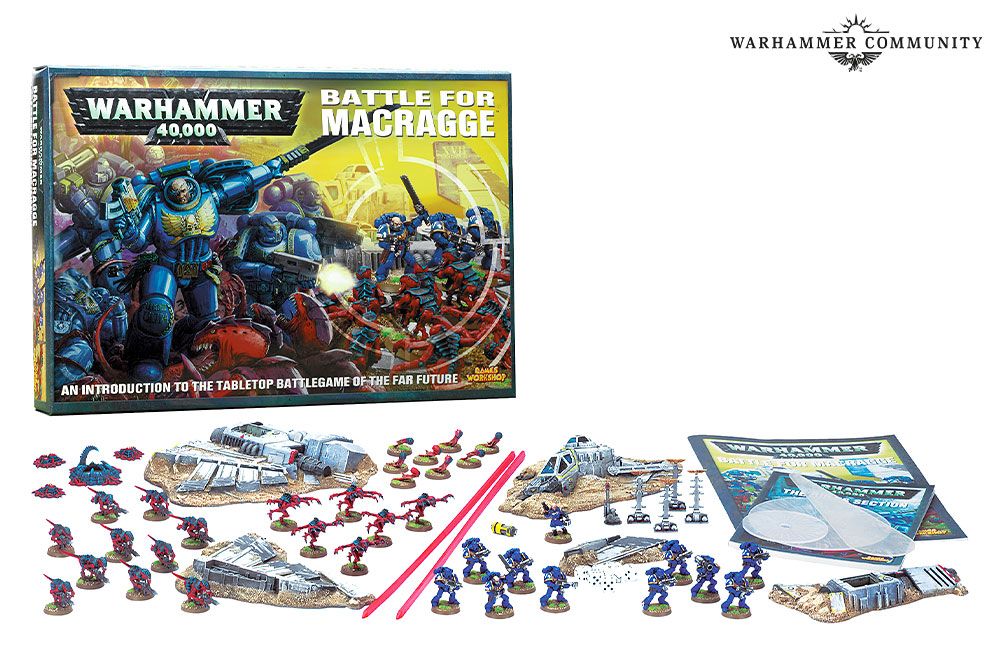 In addition to awesome new terrain in the form of a crashed Imperial aircraft, the rulebook appeared in a smaller, softback format. Meanwhile, a separate booklet guided players through the basics of the game over a series of narrative missions that saw a squad of Ultramarines attempting to rescue the downed human pilot, Lieutenant Varras, and the invaluable cargo of gene-seed he carried.

Next up was Assault of Black Reach, which saw the Space Marines facing the Orks once more. 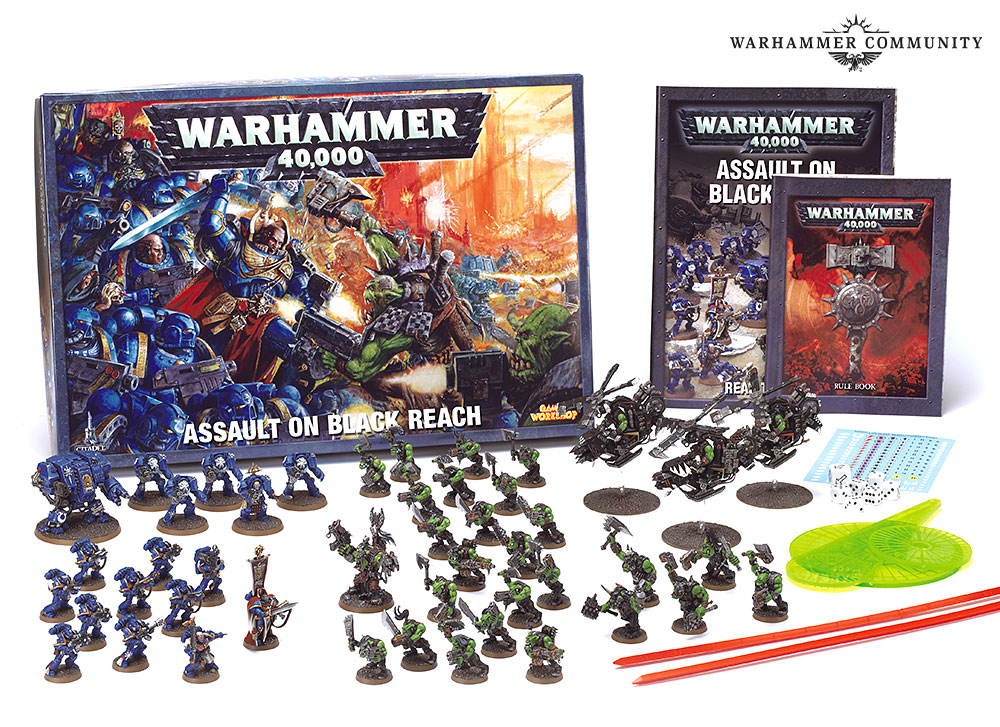 This set offered a substantial haul of miniatures for both armies, making it not only a cracking way to get started with Warhammer 40,000, but a great foundation for a collection of each faction. This set included HQ units for the first time – powerful leaders in the form of a Space Marine Captain and an Ork Warboss – as well as a towering Dreadnought and even a squadron of Deffkoptas! With so much crammed into one box, splitting two sets with a friend to double-down on one faction’s units while each picking up a copy of the rules became increasingly popular from this edition onwards.

Four years later, the Dark Angels’ hunt for the Fallen took centre stage as they faced off with the Chaos Space Marines renegades known as the Crimson Slaughter in Dark Vengeance. 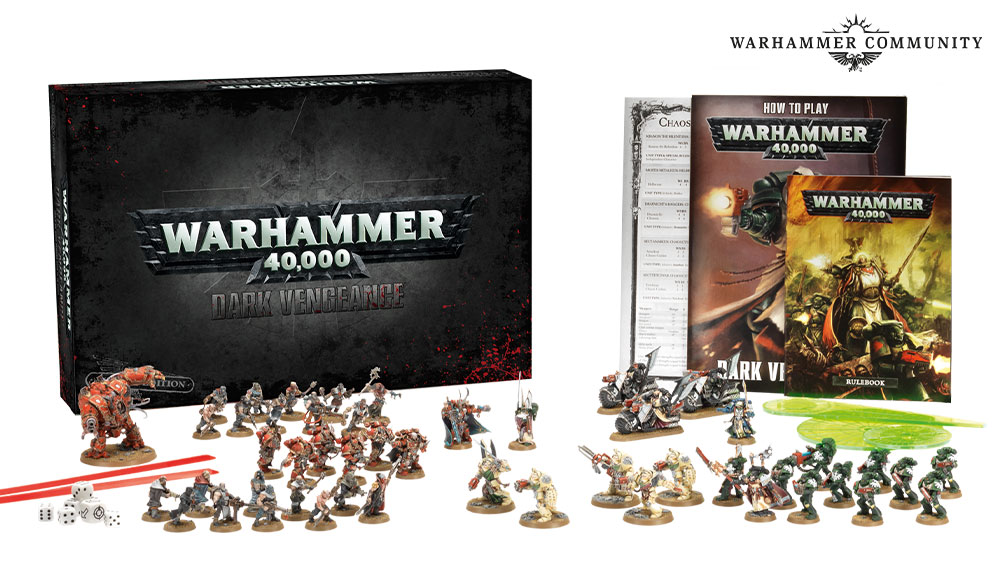 Once again, the set was almost overflowing with miniatures for each army, and featured the first appearance of dedicated models for Chaos Cultists, Chosen, and a reimagining of the Chaos Dreadnought of old in the form of a fearsome Helbrute. But it wasn’t all about the Chaos Space Marines – the Dark Angels force included a squad of Ravenwing and Deathwing in addition to a bespoke Tactical Squad. What’s more, the initial wave of Dark Vengeance sets also included a limited edition miniature of Interrogator-Chaplain Seraphicus. 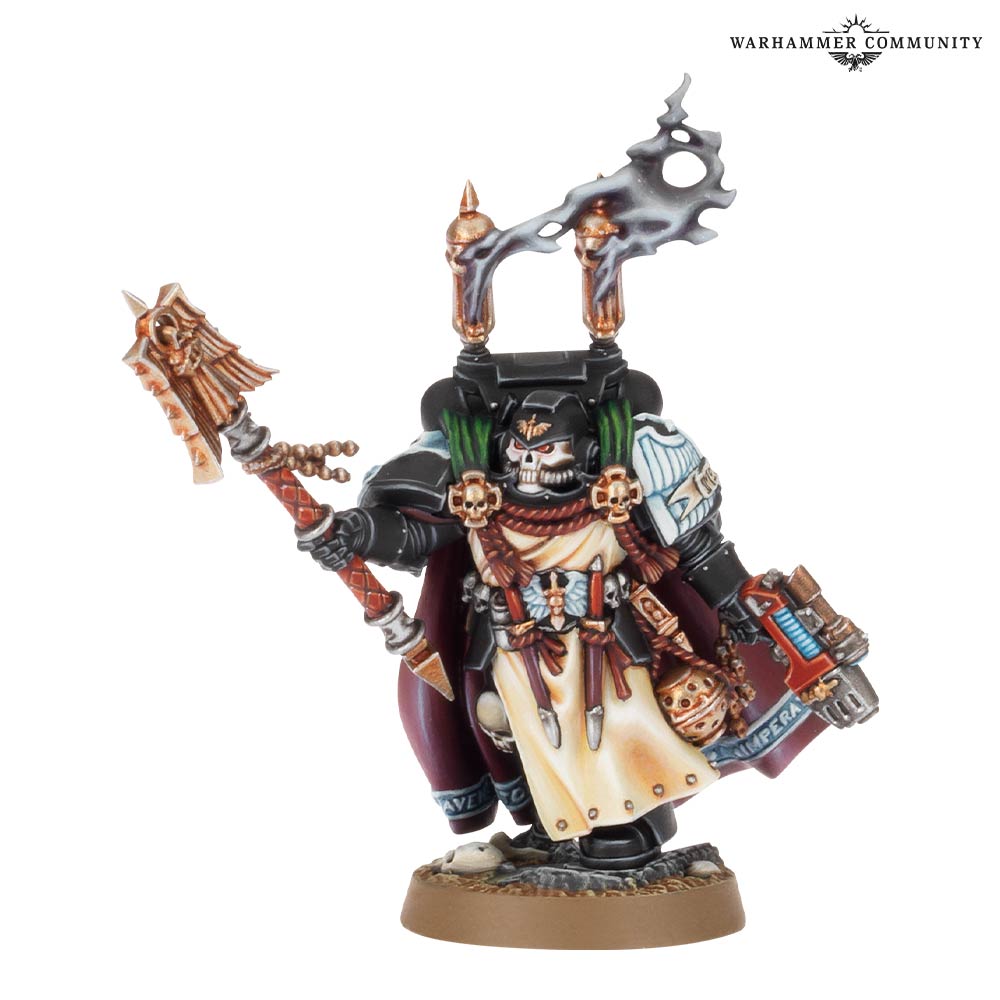 Dark Vengeance gets an extra-special mention, as when an update to the rules was released in July 2014, it remained in place as the go-to Warhammer 40,000 boxed set – and came supplied with an updated rulebook!

The Warhammer 40,000 universe entered a bold new era with the release of Dark Imperium in 2017. The Great Rift had torn open across the galaxy, all but dividing the Imperium in two. Meanwhile, the Avenging Son had been reborn and returned to Terra, even as his own realm of Ultramar was beset by the foetid forces of his brother Mortarion – the latter being the very setting for the narrative of this incredible boxed set. Oh, and did we mention the emergence of the Primaris Space Marines? 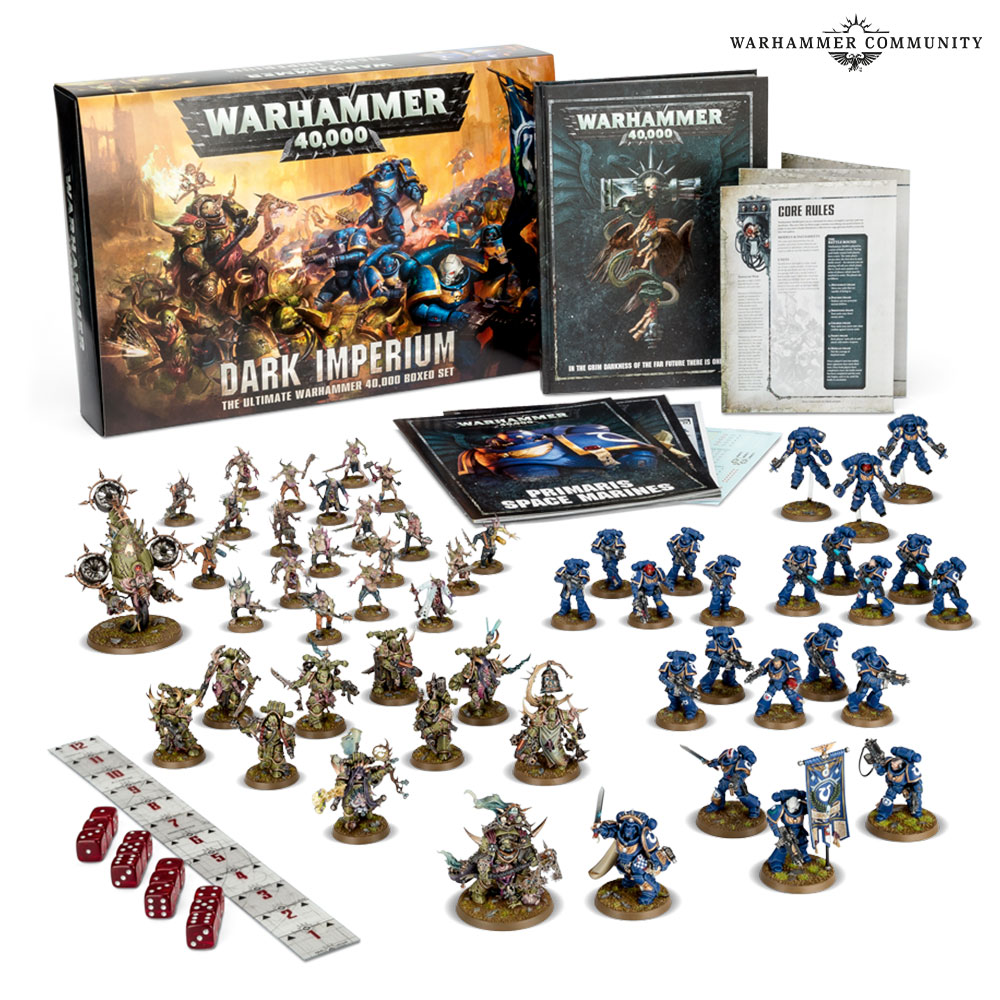 Dark Imperium represented a whole new level of miniatures design, both in terms of the reimagined aesthetics of the Death Guard and the first offerings of the awesome range of Primaris Space Marines. As ever, the set included an impressive selection of units for each of the rival factions, including multiple Characters and only a single pre-existing unit in the Plague Marines – the rest were all brand-new!

And so we come to it at last – Indomitus! 2020 may have been a troubling year for many of us, but one ray of light amid the gloom has been the arrival of the biggest, most glorious boxed set we’ve ever made. 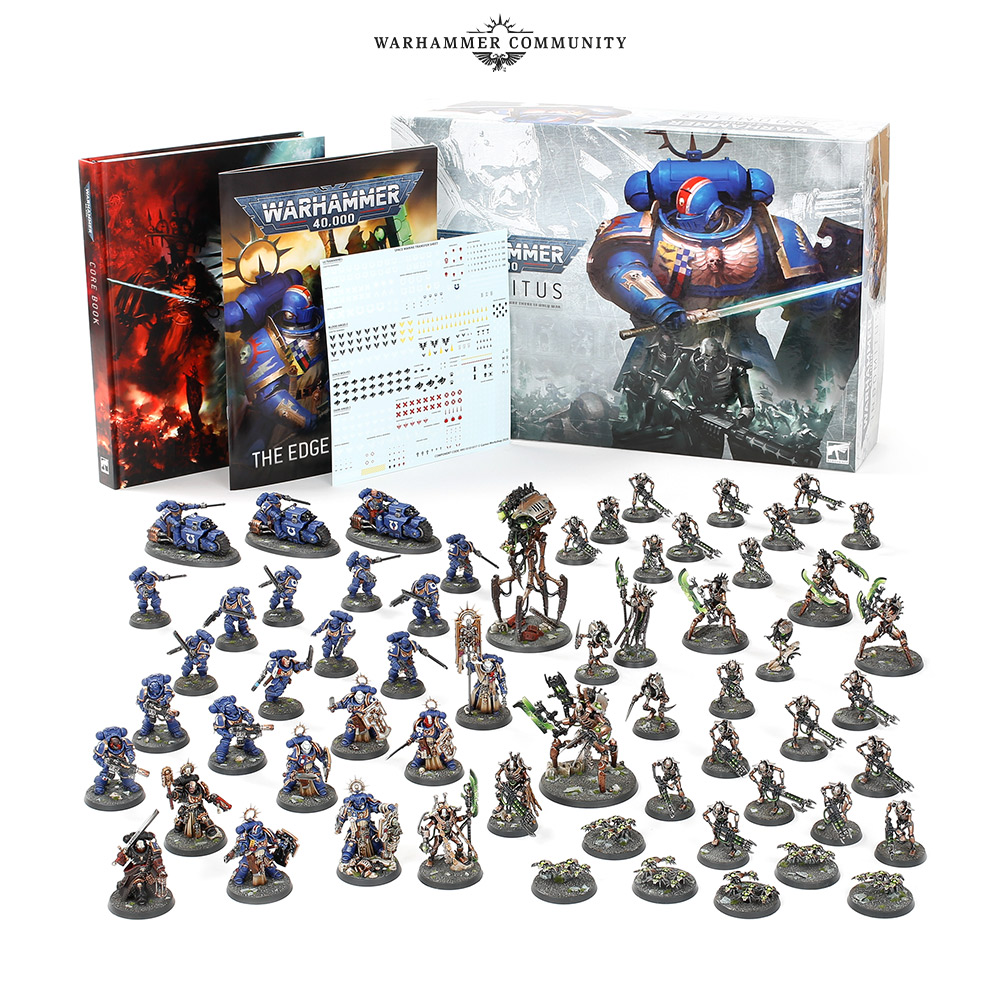 At the heart of the box is a stunning selection of units for each army, many of which are totally new additions to their faction, as well as an Indomitus edition Core Book with cover that’s exclusive to the boxed set. It represents the epic culmination of a long and glorious line of boxed sets that have heralded the arrival of each edition of Warhammer 40,000 over the years.

The awesome thing is, even if you missed out on pre-ordering a copy, you’ll be able to pick up a copy in Warhammer stores across the world this weekend, or order yours via our exclusive Made To Order offer right now!

« The Defence of Ryza: The Story
Meta Predictions from Those in the Know »
Copyright © 2020 Marco Lattanzi. Tutti i diritti riservati.