The Whiteshields Are Back, and Codex Supplement: Cadia Makes Them Hard Enough to Shrug Off Lascannons

The Octarian War calls upon the Cadians to defend the Imperium once again, and they’ll be fighting harder than ever thanks to the new Codex Supplement: Cadia found in the upcoming War Zone Octarius Book 1: Rising Tide.

This new campaign book follows an escalating conflict that erupted earlier this year with the release of the fantastic new edition of Kill Team. Matters have only gotten worse as the Imperium struggles to contain a war that its own agents precipitated – and Hive Fleet Leviathan devises powerful adaptations and esoteric Synaptic Link abilities to lay low its prey. 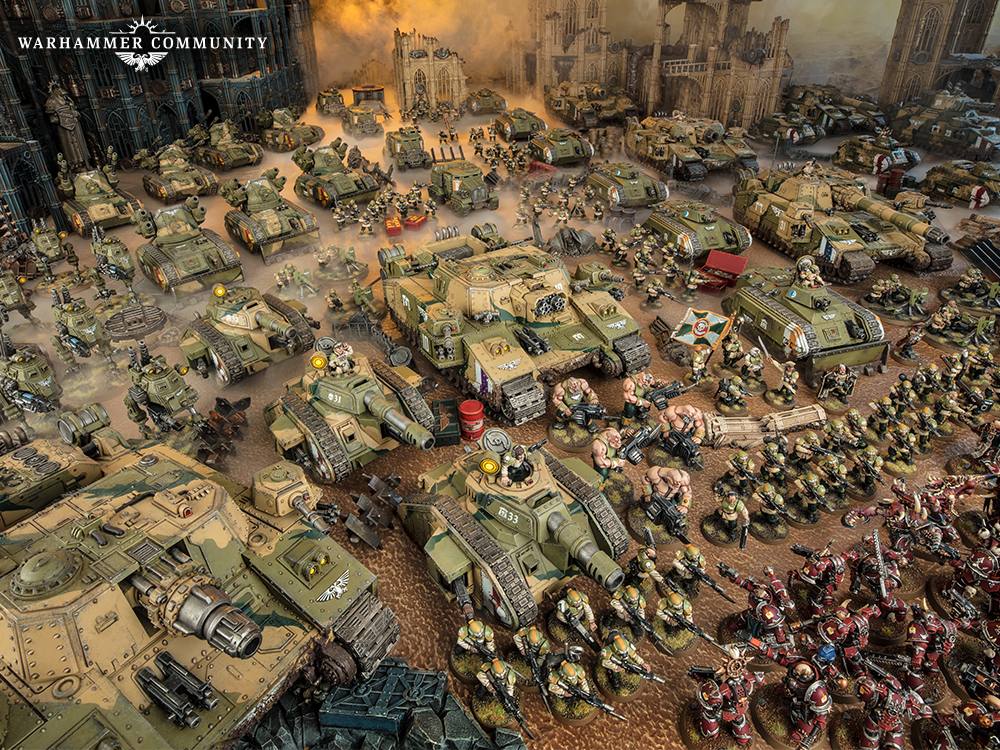 With new Stratagems, Relics, and Warlord Traits, the Cadians have tooled up in a major way. Let’s take a sneak peek at some of the rules that you can find in their codex supplement.

While most regiments of the Astra Militarum field conscripts, the famed Whiteshields* of Cadia go above and beyond. Trained to serve in the military as soon as they can walk, Whiteshields are as adept at taking orders as any full-fledged Guardsman, and they’re significantly more disciplined than other conscripts on the battlefield. 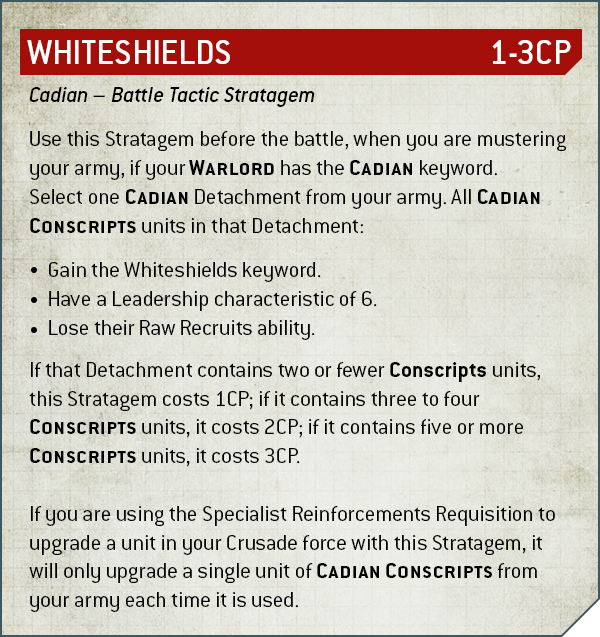 As the popular Imperial saying goes, “The planet broke before the Cadians did”,** and this tenacity is very real. By shrugging off minor injuries and refusing to yield under storms of enemy fire, units of otherwise-fragile infantry become immovable objects that are capable of absorbing lascannon fire twice as often as before. 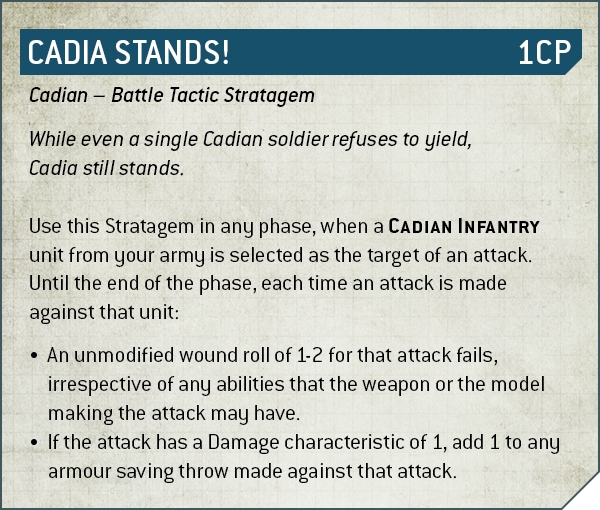 Combined with the mass manpower of the Whiteshields, Cadia Stands! allows Astra Militarum players to place huge units of durable Troops on critical objectives. All but the most brutal enemy units will struggle to shift 30 determined and dug-in soldiers, and the attention of such murderous foes will be fully occupied while the rest of the Astra Militarum does its deadly work. 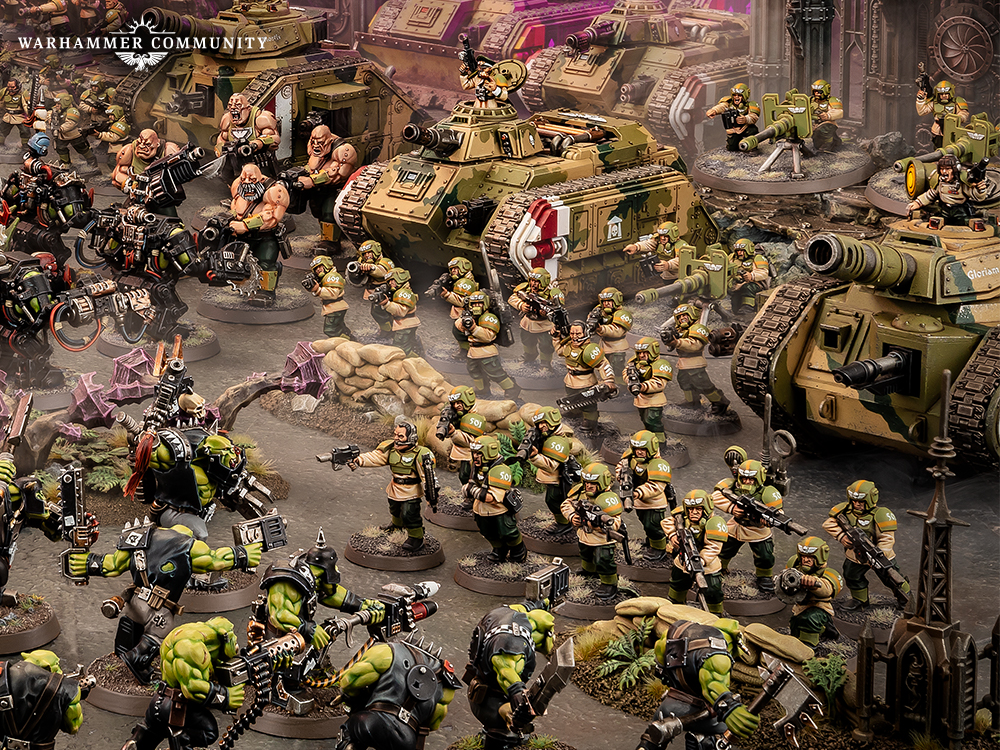 Their newfound reliability at receiving the Take Aim! order, which allows shooting hit rolls of 1 to be re-rolled, makes Whiteshields combine exceptionally well with Cadia’s Born Soldiers doctrine from the Astra Militarum codex. 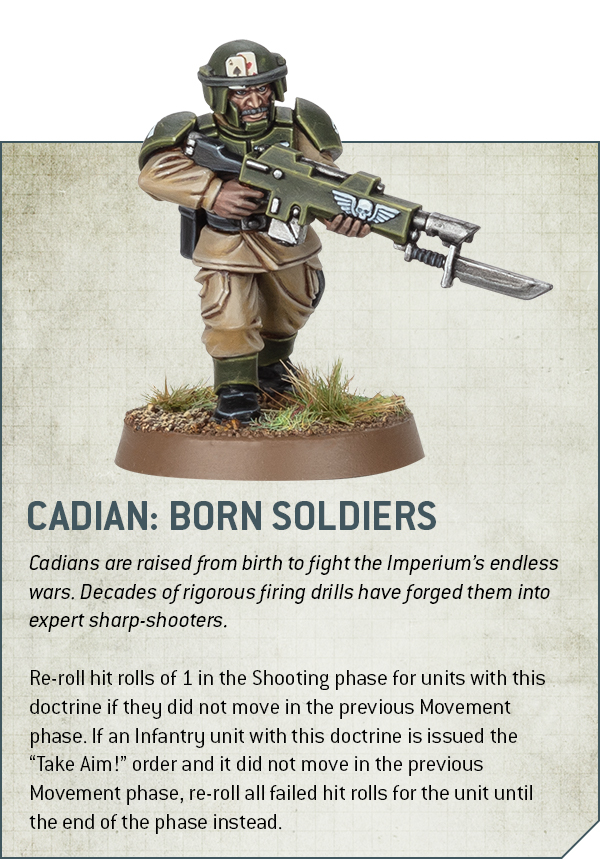 By significantly improving the hit rate of their shooting attacks, these upgraded Whiteshields give anyone who disregards ‘mere conscripts’ a nasty laser-flavoured surprise.

Before the fall of Cadia, a charismatic sergeant named Lukas Bastonne*** became the face of Cadian valour and inspired billions of troops to match his skill and grit. 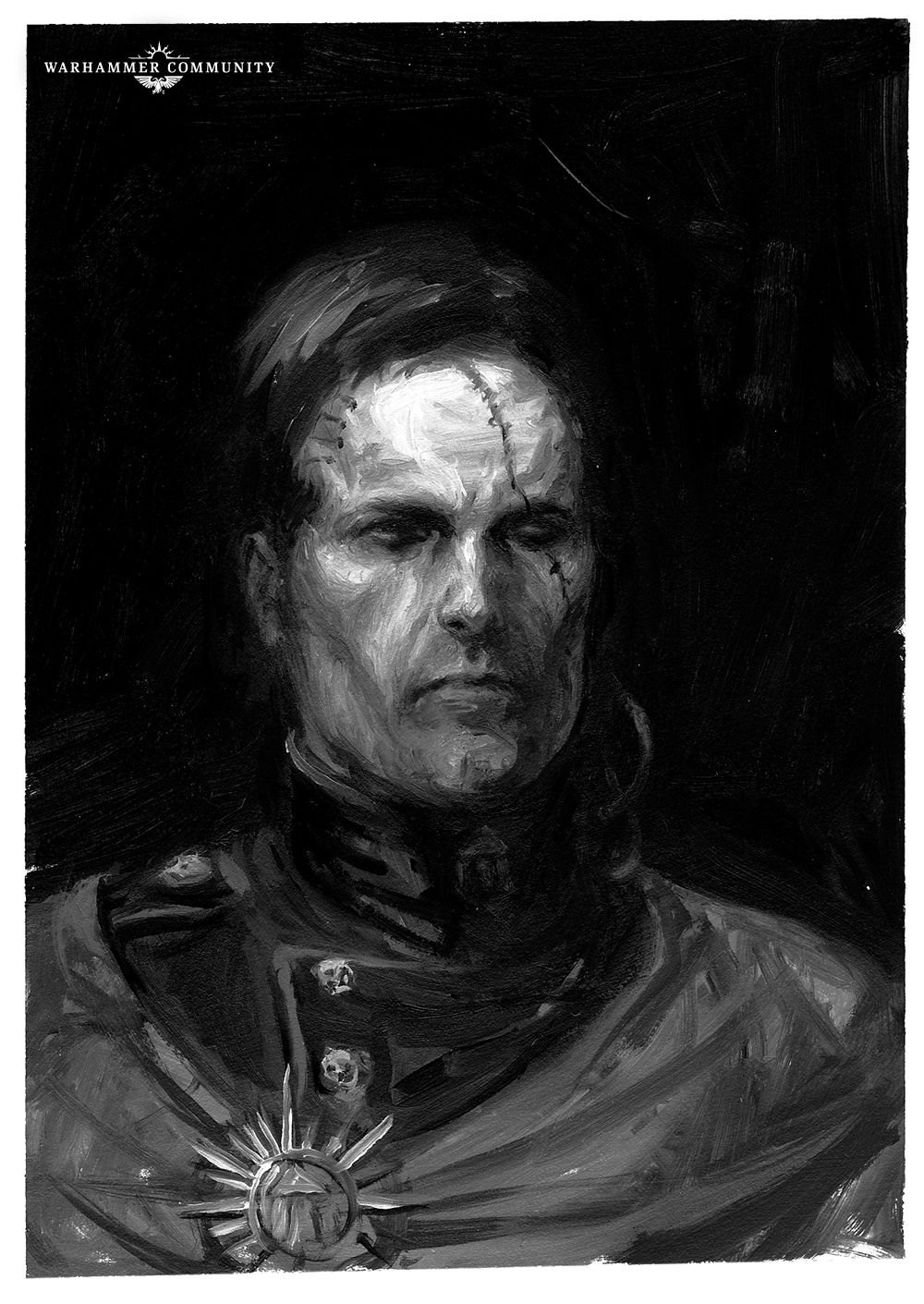 Although he met his end leading a heroic defence against Abaddon the Despoiler’s forces, his sword continues to shine as a beacon of hope and pushes away any thoughts of cowardice. 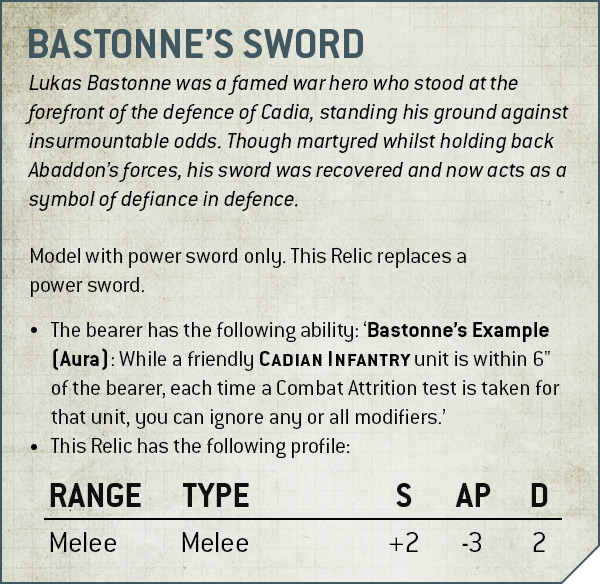 The sword itself is a keen weapon in the hands of skilled officers, and its glorious presence ensures the morale of your Whiteshields – often their Achilles heel – will be more resolute than ever. This sword is just one of several relics available to Cadian commanders, while there are also plenty of suitably obdurate Warlord Traits.

Bastonne isn’t the only hero of Cadia, and senior officers aspire to the tactical genius of arguably the most famous Cadian ever to live – Lord Castellan Ursarkar E. Creed. His ability to sneak even massive war machines behind enemy lines was legendary, and capable commanders frequently employ his strategies to rapidly redeploy their forces. 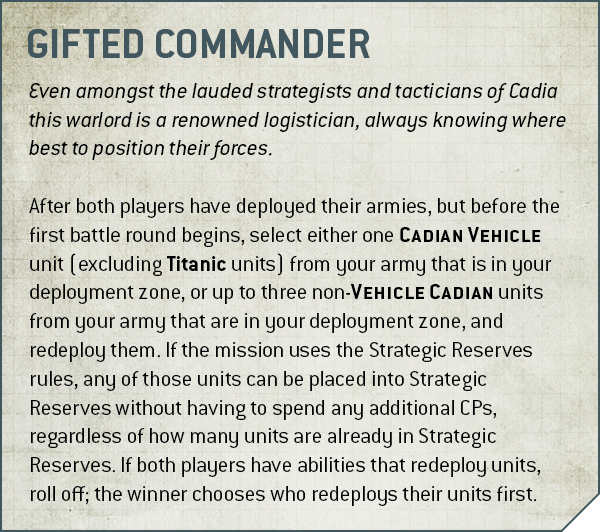 There’s plenty more to see in Rising Tide, including a new suite of Crusade rules for Astra Militarum armies, so stay tuned as we take a deeper look into War Zone Octarius later this week. Will you be bringing the might of lost Cadia to your battlefields? Let us know on Facebook, Twitter, and Instagram, and show us your mightiest Cadian armies.

* So named for the white stripe on their helmet marking them as a conscripted soldier.

** When referring to Cadia’s dramatic destruction at the climax of Abaddon’s Thirteenth Black Crusade.

« War Zone Octarius Book 1 Turns Your Biggest Bioforms Into a Nightmare for Enemy Characters
Redesigning the Black Templars – How the Team Updated the Chapter That Refuses To Change »
Copyright © 2020 Marco Lattanzi. Tutti i diritti riservati.