One of the most exciting elements of the new edition of Warhammer 40,000 is the immersive, narrative-driven Crusade system. To show you just how awesome it is, we’re taking you on a virtual Crusade and, over the course of the series, we’ll be introducing you to each element of the campaign system. In our final instalment, we’re looking to the future* to see some of the different ways in which our Adepta Sororitas Crusade force can develop. 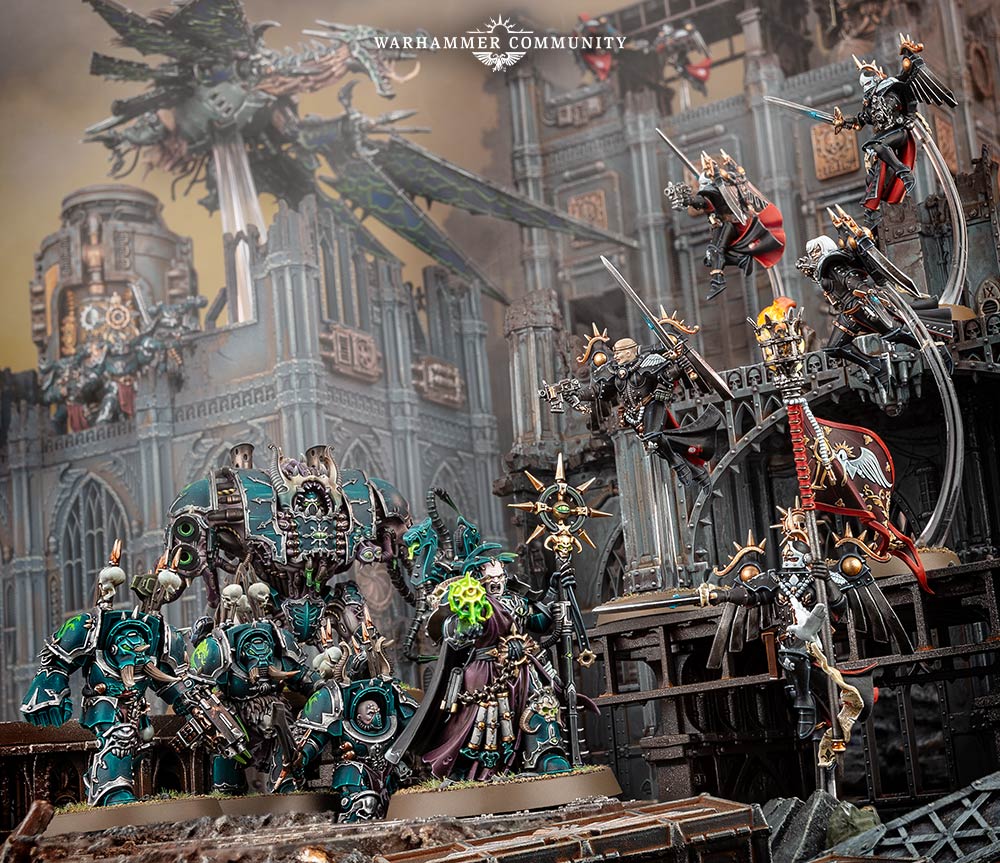 After what turned out to be a crushing victory over the Black Legion in part four of the series, our Adepta Sororitas Crusade force is back on the front foot once more! We resolved the end-of-battle results – here are the highlights:

Here’s our updated Order of Battle so you can see how things stand. 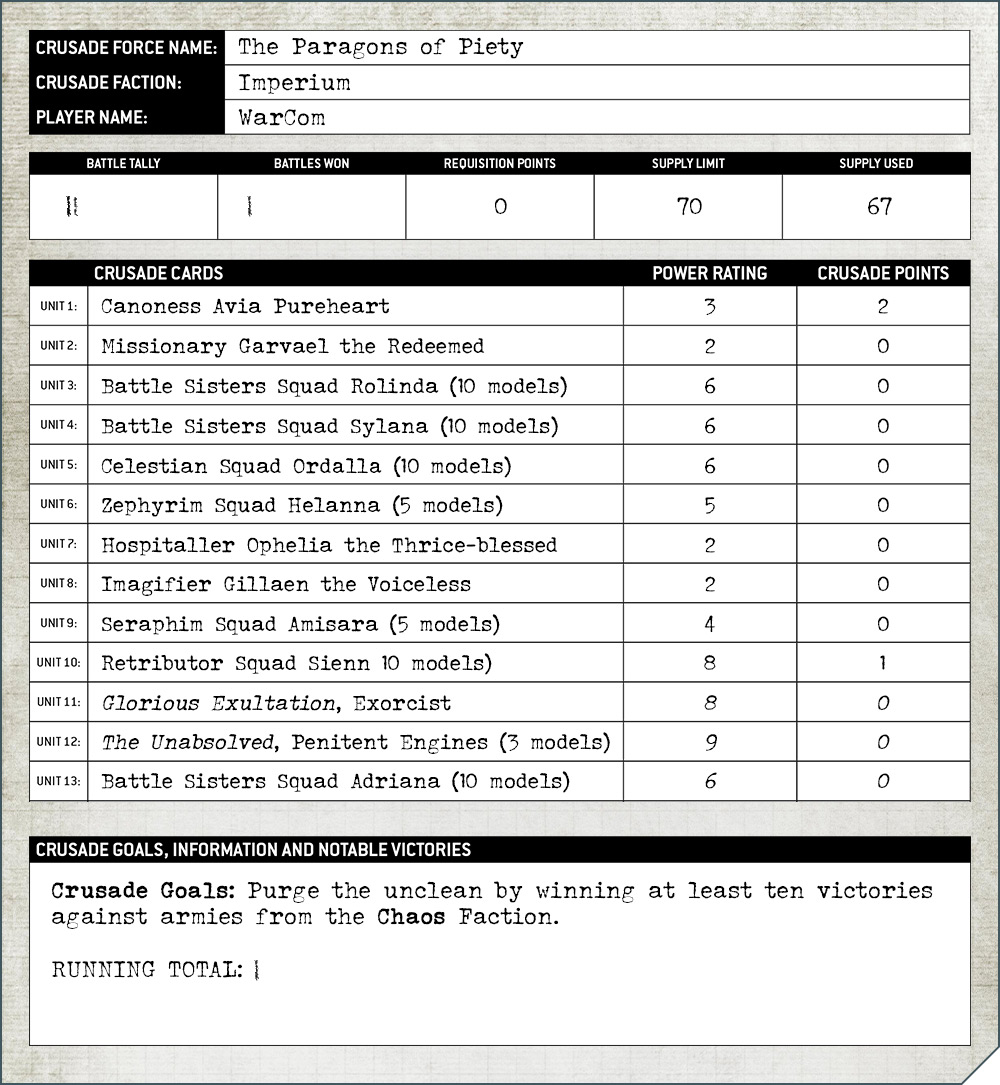 With two Crusade battles under their belt, what now for the Paragons of Piety? Well, we may be out of Requisition points until after our next game, but our Order of Battle is looking solid and well rounded – and it certainly isn’t short of a hard-hitting unit or two. If we choose to stick with a purely Adepta Sororitas Crusade force, there are still a number of additions we can make. We could increase Zephyrim Squad Helanna and Seraphim Squad Amisara to 10-model units, add some more melee specialists such as Sisters Repentia and Arco-flagellants, or increase our Vehicle pool with an Immolator or even a second Exorcist.

Alternatively, being part of the Imperium Faction, there’s a huge selection of allies to choose from. Some Black Templars Space Marines would make suitable cohorts for our zealous Adepta Sororitas, as would an Ordo Hereticus or Ordo Malleus Inquisitor and their entourage to strengthen our Crusade force’s narrative theme. If we save up enough Requisition points, it’s even possible to increase our Supply Limit enough to include an allied Imperial Knight. After all, for games larger than Combat Patrol, you’re free to use multiple Detachments of any type in a Battle-forged army – even a Super-heavy Auxiliary Detachment – provided you pay the appropriate Command Cost.

If ever you need some inspiration to start your own Crusade force, there are some fantastic armies featured in the Core Book. Rules writer Sam Pearson’s Genestealer Cults uprising actually features in the Crusade rules section, and is a fantastic example of how a collection can grow from humble origins into an impressive force. 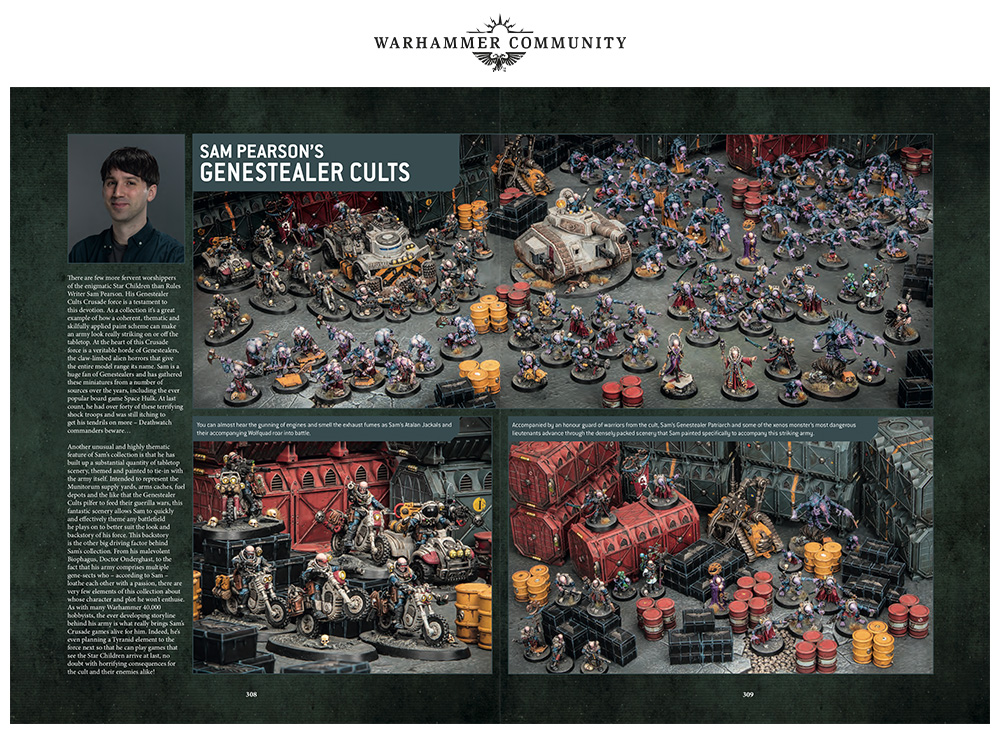 We hope you enjoyed following the early progression of our Adepta Sororitas Crusade force and you’ve been inspired to start your own. If you do, you won’t have long to wait – the awesome new Warhammer 40,000 Core Book arrives in stores worldwide in just over one week’s time! Alternatively, head online and pre-order your Core Book today, as well as a Crusade Journal to help track your army’s progression.

* The Emperor’s Tarot may have been involved.